CHRISTMAS; We hope that everyone will enjoy the holidays with family and friends and take time to reflect on the many blessings we have in this country!

FILING PERIOD; The 2020 election cycle filing periods ends Friday December 20 at noon. IF YOU are one of those folks who has considered filing for office, NOW IS THE TIME to make it happen! ( Senate, NC House, Hoke County Commissioner, Register of Deeds and many more. In Hoke we have a gentleman who has filed to run for NC Senate District 21 (Cumberland and Hoke) currently held by Democrat Ben Clark. SEV PALACIOS is a Hoke Republican who is a former Marine and has a ton of experience in government, military and civilian as well as business administration. Learn more about SEV at his web site www.palacios2020.com.  IF YOU want to run for an office, you have until Friday December 20 at noon at the Board of Elections. Of course we have Hoke County Chief Deputy District Attorney Mike Hardin running for the newly formed judicial district with Moore and Hoke. See his web site here: www.hardinforda.com (there is a Republican challenger from Moore County in Authur Danadio who is a Moore County attorney.

HOKE COUNTY; You don’t have to look far to find out what Hoke County Commissioners are doing with our Planning and Zoning when it comes to “Electronic Gaming” (or commonly known as Gambling Parlors) operations in Hoke County. The ones who our Sheriff recently shut down. The ones where in this county has a history of crime and even someone being killed. Places where someone was pistol whipped, people are harassed, fighting, people “hanging out” late at night, allowing them closer to schools, churches and daycare’s. Also allowing them to black out their windows. These places are not good for our community and they bring people into Hoke County who come here because their communities don’t allow it and we do. STILL PENDING is how the county handles the issues with people raising Cockfighting Roosters trying to say they are just raising chickens for home benefit. PROBLEM ARISES AGAIN-during the last big rain, Northwoods Neighborhood across from East Hoke Middle flooded again. In light of all these neighborhoods being built in Hoke County, are we really “digging in” to how and where they are being built reference water drainage or are just creating more problems by not looking at it hard enough?

RALEIGH; NYC’s Bill DeBlasio has been relocating some of their homeless population to North Carolina without notifying state (unless Cooper’s been talking to him) and local officials. So far, Attorney General Josh Stein hasn’t made any indications he’s going to stand up for his state and Senator Britt is calling on Cooper to take action. WBTV

Some of y’all have heard of the Leandro case, filed back in the mid-90s ( Leandro Family is from Hoke) over the state’s constitutional obligation to provide a sound, basic education to children. It’s been litigated for years and just this week a report was released on what *could* be done to improve state education. There are two sources on this story you can read: NC Civitas | John Locke Foundation

Let’s end this section with a video: North Carolina Insurance Commissioner Mike Causey has tried to clean up the mess left behind by Wayne Goodwin, the former commissioner and current chair of the North Carolina Democrat Party. Check in on Causey’s efforts here. The News & Observer

NATION; The IG report dropped this week in the midst of the impeachment proceedings in the Judiciary Committee, and it has not gone well for the Democrats. Across the pond, it turns out that being a rabid anti-Semite and pushing extreme far-left policies like socialism (sound familiar?) gets you the biggest election loss since 1935 for the British Labour party, endorsed by Rep. AOC and Sen. Sanders. Congrats to Boris Johnson and the rest of the Conservative party on their resounding new majority in Parliament.

IMPEACHMENT SHAM; As we get set to watch House Democrats vote on a straight party line vote on impeachment ( I thought impeachments were suppose to be bipartisan ) and for High Crimes and Misdemeanors and there is just simply no THERE-THERE! They just want to undo the will of the people from the 2016 Election because they don’t like President Trump! Real Clear Politics Polling now show more people are against impeachment than are for it. ALSO some Democrat leaders are either leaving the party and switching to Republican or are NOT GONNA VOTE for Impeachment. Democrats are losing! They are losing in the polls, losing elections and losing trust of the American People. When they go back home to their districts, they are quickly learning this was a huge mistake. They also want to try and re-try the whole House Impeachment trial in the Senate with new witnesses however Republican leaders are saying that is not going to happen! THE IG REPORT shows there were “mistakes” in the FISA Court applications and some believe there were actually crimes for falsifying FISA court applications and not telling the truth about the Steele Dossier which started the whole thing was paid for by the Democrat Party and Hillary Clinton. They lied about Carter Page and said he was working for the Russians when he was actually working for the CIA. BOILING IT DOWN as a friend said to me, “The FBI was Out to Get President Trump”! Plain and simple. Looks like old Rudy Giuliani has some NEW INFO that the Ukrainian Ambassador BLOCKED Visa’s to people who were going there to testify against the Biden’s and the Democrat Party….BUSTED !  and let’s add in there that James Comey himself has admitted on National TV that False Evidence was given to the FISA COURT. 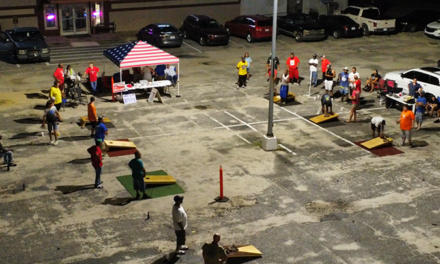 God v. Evil Saturday night in Southern Pines ahead of the drag show … Thanks to Cavalry Christian for coordinating. ... See MoreSee Less
View on Facebook
· Share

WHAT THE MEDIA WILL NOT SAY about Trump endorsed candidates. The Gateway Pundit !! ... See MoreSee Less

BIG DAY for Trump-Endorsed Candidates that Fake News Media Will Not Report - 9 Losses and 174 Wins So Far!

According to the fake news, former President Donald Trump did not see the victory he had thought his endorsement would create on election night. But that is not accurate. Trump already has tallied mor...
View on Facebook
· Share

SHUTTIN’ DOWN THE QUESTION and actually blocking the people from hearing an answer to; How and Where did it start !! ... See MoreSee Less